Earlier this week on Twitter I got into a back and forth discussion on whether Influence could be measured with Niall Cook. Niall essentially says that:

I am reaching the conclusion that influence cannot be measured, and thus is a futile metric for exploration.

Though this may end up being a chicken versus the egg type of discussion, I decided to throw up some visual representations of my thoughts on the matter and have some fun with it. Here are Niall’s thoughts on the topic: Social Media influence cannot be measured. One issue- there is a bit of a difference between social media influence and influence… Or is there? What are your thoughts?

Yes they should. But they’re not and that gets them in trouble.  remember the old saying, Measure twice cut once? That means you’ve only got one shot at cutting the piece of wood. The point being “make sure” you have the right measurement. Be sure about your post, before you hit publish.

Back in September I remember asking Brian Solis the exact same question at Web 2.0 expo in New York, “Should Bloggers be held to journalistic standards?” and he answered yes. Bloggers need to be held to some type of standard.Why did I ask Brian? Because he has a unique perspective, he’s a content creating machine and he cranks out volumes of noteworthy and spot on commentary about the social media and PR space and he is accutely aware of what he writes and says.

But a larger point is this.

Bloggers need to hold THEMSELVES to some sort of standard.

Why? Because when they start writing about people and companies and events- and if they have any type of influence, and they get it wrong-the backlash can be brutal for all parties involved.

Which leads me to the reason I’m writing this post. Yesterday Forrester analyst Jeremiah Owyang wrote a post about the social media company, Mzinga. It did not go over very well.  Suffice it to say that regardless of whether Jeremiah was correct in what he asserted or speculated, what happened next was nothing short of a shit storm.

Yes the mob mentality reared it’s ugly head again and yes Jeremiah was wrong in his approach. But at some point, 2 things need to occur. One, the Mob mentality needs to back off. and Two, Jeremiah needs to apologize.

After comment #19 Jeremiah realized he screwed up and he ultimately apologized and posted a retraction of sorts. However the mob continues to vent some 60 comments later. At last count there were 2 posts that were sympathetic.

So what do we learn from this?

Interestigly enough, even a Forrester analyst has room for improvement. It’s a simple as this for Jeremiah and actually speaks to a vlog I did prior to this post. One of the things we must do, as hard as it is, we must:

Practice a sense of patience.

Instead of rushing to break a story, perhaps it might make better sense to feel the situation out or better yet..”Measure twice, cut once”.

Ultimately, since we do not want to be policed by the mob mentality, we have to police ourselves, and hold ourselves to some type of journalistic standard. No one else will-unless of course you count the blog mob and twitterati.

Lastly, for the mob mentality. Ok  so you’re pissed. And you let Jeremiah know about it. Ok he got that. I get that.  But reiterating over and over again, virtually the same thing, gets tiresome, boring and lacks any type of  originality or constructive criticism.  Maybe the mob needs realize that pitchforks and torches never really worked that well anyway. 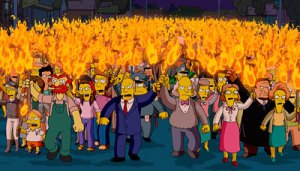 I’m currently watching engaged in a lively saturday morning discussion with Jeremiah Owyang, and Ted Murphy Founder/CEO of IZEA on whether bloggers are going to become more of an advertising vehicle for brands. Though this not neccesarily a new topic, it may be becoming prominent again based on a lot of external economic factors. It started with this: 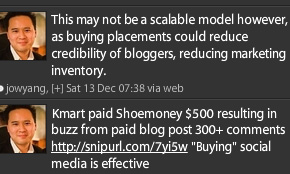 Jeremiah goes on to say “Bottom Line: Expect more brands to ‘buy’ bloggers and tweeters as the economy dips, this truly is cost effective marketing”

But is it? Will you, as a blogger become more open to being paid by a brand or company to shill their product to your loyal readers who come to your site because of your candor and POV? Won’t that change the scope and the depth of your posts? Is the economy such that we now will come expect that a Chris Brogan is now going to start pitching product? The easy answer is, “just avoid any paid posts”. But what if you don’t know? Chris might be the exception in giving full disclosure of the paid post.

You as the loyal reader will now be the audience to a pitch from your author, full disclosure is not a prerequisite either, although Ted Murphy does mention: 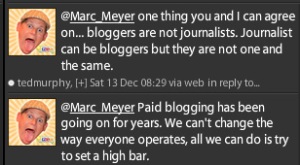 So how do you feel about that? Is it going to change now how you read or what you read from your favorite blogs?

Will full disclosure matter? Will you read a blog post knowing it is essentially a paid pitch for a product? Isn’t that the same as a celebrity spokesperson? What if they pitch but don’t tell, because they know they will lose readers if the readers knew that it was a paid post?

What’s not evident is the post Jeremiah is referring to on Chris Brogan’s site is on Dad-o-matic and not Chrisbrogan.com 2 distinct and very different blog sites. So the questions remain: 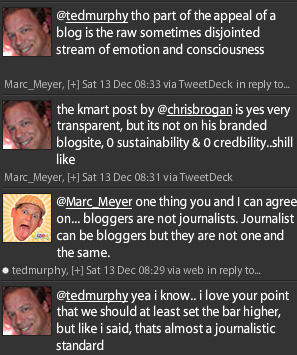 So there’s more to this Twitstream but the question is more geared towards the reader, since bloggers have been getting paid for quite some time now for paid posts. It all comes down to the “big bloggers” and theirloyal  readers. Will your loyalty wane if you know going forward, that the post you are reading, is a paid, sponsored post? Do you care?