Can anyone add some scalable and yet granular social networking, web 2.0 buzzwords to this bingo card to essentially bootstrap this into a viral marketing message? 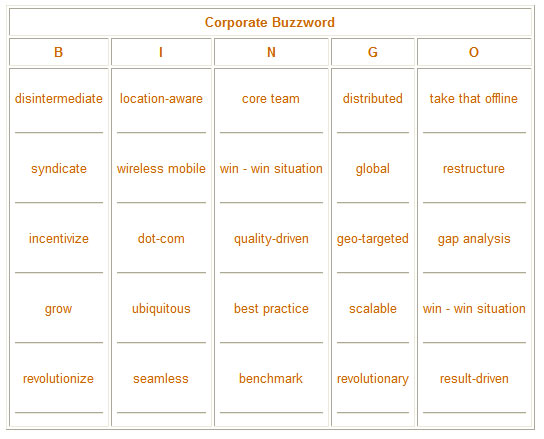 Simply put, a widget is a portable chunk of code that can be installed and executed within any separate web page by an end user( You or I) without requiring additional work or previous knowledge on the users part.  Other terms used to describe widgets include: gadget, badge, module, capsule, snippet, mini and flake.

Widgets often but not always use DHTML, JavaScript, or Adobe Flash.  A widget adds some content to that page that is not static. Generally widgets are third party originated, though they can be home made. They add a more rich, entertainment, multi-dimensional feel to a site that might be otherwise static.

Widgets are now becoming more commonplace and are used by bloggers, social network users, marketers, advertisers, and owners of personal web sites. They exist on home page sites such as iGoogle, Netvibes, Pageflakes, SpringWidgets and yourminis, and hundredes of other sites.

Widgets are used as a distribution method by ad networks such as Google’s AdSense, by media sites such as Flickr, by video sites such as YouTube and by hundreds of other organizations.

Applications can be integrated within a third party website by the placement of a small snippet of code. Which is now becoming a primary distribution or marketing channel for many companies. The code brings in ‘live’ content – advertisements, links, images, and video – from a third party site without the web site owner having to update.

Thus the end users can utilize widgets to enhance a number of web-based hosts, pages or drop targets. Categories of drop targets include social networks, blogs, wikis and personal homepages. Although end users primarily use widgets to enhance their personal web experiences, or the web experiences of visitors to their personal sites, corporations can potentially use widgets to improve their web sites using syndicated content and functionality from third party providers. They are also now using widgets as a carrier of their branding message or product.

So where can you find some widgets? The easiest source would be generally on the page you are currently reading, either on the left or right side of the pages. The widgets are dropped in via a widget managment system. Should you feel compelled, check out KickApps which states: The KickApps hosted, white-label platform puts social media and online video functionality directly into the hands of every web publisher who aspires to be a media mogul and turns every web designer and developer into a social media rockstar! With KickApps, it’s now easier than ever for web publishers to leverage the power of social and rich media experiences on their websites to drive audience growth and engagement.

If you are the casual reader, then hopefully this helps you. If you are a certified blogging fool, then this is nothing that you already don’t know. If you are somewhere in the middle, then now you have been enlightended.