I saw this post in Adfreak about a social networking campaign on Facebook to combat the spread of a particular STD. The kicker was the campaign was dubbed “Spread it to beat it”…huhh?

Now here is a niche that no one will ever fess up to but all have travelled through at some point in their business lives. Check out EthicsCrisis Here’s an excerpt…

I had received an e-mail from an account manager whom I loathed for her inability to do her job correctly, even at the most simple level. After receiving this ridiculous e-mail from her, I wanted to send it to a peer of mine whom I had vented to to witness firsthand just how bad she really was. I flamed intensely on the forward, and then sent it off — only to realize that I had REPLIED to the e-mail, not forwarded it.

Do you ever want to draw on the back of business cards? Then check out Gaping Void 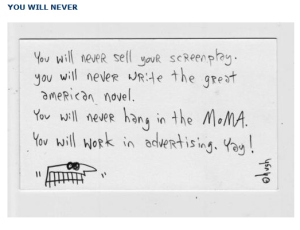 Guess what? The Wall Tweet Journal has contacted me!

Scott Van Pelt of ESPN has started to hit his stride at ESPN. He has now joined MIke Tirico as a cohost in the afternoon, as well he has his own hour. Good for him, he has the humor and knowledge to make the most of his time on air. FYI- Last night Lebron was fouled at the very end of the game and Caron Butler walked. Sure makes for some fun before dog days of summer begin. And yes Van Peezy, Deshawn is a punk. At least on the court.

Im reading a great blog at the moment by Gavin Heaton and eveeryone should hop on over when they get a chance and give it a good read!

1 thought on “6 degrees of social randomness”