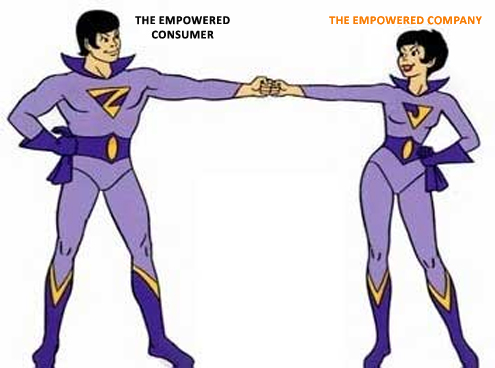 Brian Solis from Altimeter Group used the term empathetic business models in a recent blog post titled, A Critical Path for Customer Relevance, Part 1, and though it sounds good and I would like for all businesses to “be” that in the end. I prefer not to use it to describe    an ideal business model, as much as I think it’s more of an idealistic business model, and I think he knows this. Here’s the exact quote:

A key objective for senior executives over the next several years is to use disruptive technology to get closer to customers, to improve relationships, and enhance experiences. It is a considerable move and the result will usher in a new era of adaptive and empathetic business models. However, this is a move that is easier said than done.,

What makes more sense today, and Brian actually touches on it in the next paragraph, is how do we deal with the empowered consumer? I’m not so sure an empathetic business can deal with the an empowered consumer. I’m not saying they can’t, merely that it might be somewhat one sided.  What we need to look at is the empowered business and the empowered consumer together, as one. Put the two together and it’s lightening in a bottle. I think of the two as having the potential of the Wonder Twins. The Wonder Twins, are comic book superheroes. Their powers are activated when they touch each other and speak the phrase, “Wonder Twin powers activate!” This phrase is unnecessary and just a habit of theirs, but it’s catchy. Physical contact, however, is required. If the two are out of reach of each other, they are unable to activate their powers. As they are about to transform, they would each announce their intended form. “Shape of…”, “Form of…”

So think about this. An empowered business without the customer means nothing. An empowered customer who wants to buy from a business that doesn’t get “it” means nothing to that business-it’s just a lost opportunity to that business. Today’s empowered consumer has too many tools at their disposal to make an informed and educated buying decision. For a business to say, It’s a fad and it’s business as usual and the digitally empowered consumer will buy from us because of our history and are heritage-that just won’t cut it any longer. Today,  every CPG company has to have as much ammo as their customers. Has to.