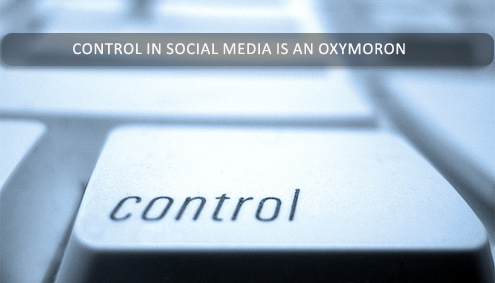 Every one likes to be in control. Including corporate America, and yet that is their greatest fear with social media. Loss of control. They fear the digitally enabled employee-The digital native. They fear the new found empowerment of an existing employee and the new hires that have expectations around the company being truly social and digital. What we are slowly starting to see, is an underlying assumption that access to social networks is a right and not a privilege; and as we hurl into a new decade-this expectation will only continue to grow.

Remember how email initially was viewed within an organization and how we treat it now? First it was feared that email would sap productivity and now it’s a utility we can’t do without…

For a growing few, there is an understanding and realization of the power and necessity of social within an organization. Some of the likely examples that you may be aware of, are of course Zappos, Cisco, Dells, Best Buy, Home Depot, P&G, for example. All great poster children for corporate social success and the list continues to expand. Those companies are the ones that get it; but interestingly enough what you are never told about these companies, is that they too probably struggled early on, both internally and externally. They too probably had their fair share of resistant or skeptical employees who did not want to be social. It’s natural. This too shall pass.

The fear is always there with anything new. Social is no exception. We are asking people to communicate. We are wanting the B personalities to share. We are asking you to collaborate. Of course some would say well social isn’t new anymore. Well I hate to break it to you but though Facebook is nearing the holy grail of 1 billion registrants- There are still a lot of people and a lot of companies out there that are:

What’s more daunting beyond that fear and the whole “who owns social” argument, is that within some of these large siloed companies that are willing to take on the challenge, social walks, talks, acts and looks different in each and every department and will not resemble what it looks like with your competitors or peers. Daunting indeed.

Beyond daunting will be the challenge to not only integrate it successfully into the unique culture of their companies, but also to manage it, nurture it and turn it into less a fear of loss of control but more of an asset in managing the success of your employees and the happiness of your customers.

Social media is no longer an if statement, it is most definitely a when statement. Start now.

6 thoughts on “What Does Corporate America Fear the Most with Social Media?”