This past week something occurred that seems to have slipped by people rather quietly. Frank Eliason is leaving or has left Comcast. For those of you that have been dialed into social media for awhile, this is significant for a number of reasons and you’ll know why.

The biggest reason is that we, the social media community lose our poster child/case study of how one person with one tool/platform can transform how a company operates in the social media spectrum of customer service. Can some of you even count the number of times you might have used ComcastCares as one of your social media “examples” 2 years ago.

If you don’t know who @Comcastcares is or was, it was merely one of the first  large companies/individuals to take Twitter and use it as a direct bridge or line of communication into Comcast customer service for real time/any time help of customer service issues.

When social media case studies were few and far between, Frank’s work at Comcast was our shining example of Twitter and customer service. We name dropped Comcast along with Zappos and Starbucks and Jetblue.  So much so that Frank’s personal brand grew, and grew and grew. Not because he was promoting himself, merely this was just the effect of his social media success.  @Comcastcares was as much Frank as it was Comcast. They were synonymous with each other-interchangeable if you will.

Which lead to an interesting conundrum as well as the second reason why Frank’s leaving is significant. It’s something in which a lot of us in the social media community had often talked about, tweeted about, written about and speculated about, and that’s this:

Well guess what? It’s finally happened. Frank, little did you know but you may be  creating another case study for all of us. Good luck, and thanks for setting the table, taking chances, and leading the way for a lot of companies and people that will have no idea that you might be reason they are using Twitter for customer service. 🙂 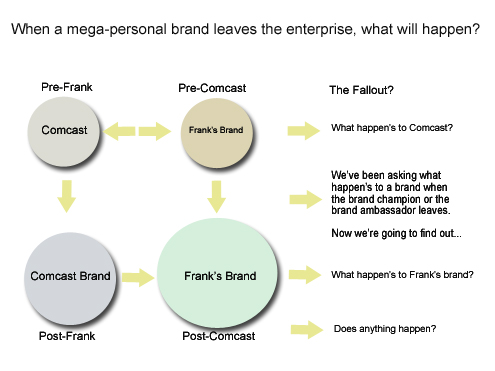