Or is it? Does it make my life more fun? Is it eventful?  I’m not as bad as Tom Foremski who had 37, 240 unread emails in his account when he wrote an article about it. all I can say is wtf? Tom… Slacker! But actually Tom’s dilemna probablly mirrors others.

Maybe this is me? Courtesy of Geek and Poke titled “I have no time, I have to be social.” 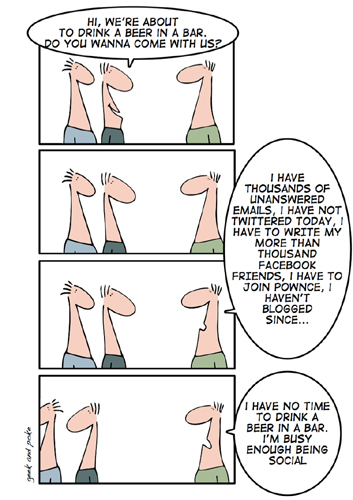 Sometimes I feel like it. Actually I feel guilt if I haven’t posted anything on the blog.  But seriously, don’t you sometimes feel like you have to hit all of these social sites to a) check in and b) see whats up and c) to be dissapointed when nothing is happening? I’ve often blogged about social media saturation and in fact, asked it of my Linkedin brethren, but I had phrased the question a bit differently. It went something like this:

What do you think the formula should be for social media saturation? Have we reached it yet?

The question is really more about saturation levels in regards to how much more we can take, but the answers were more of a, has social media reached critical mass bent. In fact Jon Udell had a post titled, “Critical mass and social network fatigue” in which he wrote,

He wrote that over a year ago, I wonder what he feels now. The social networking stratosphere has grown exponentially since then and the problem is…

There are wayyyy too many cool apps and  new social networks out there to ignore and NOT join in the conversation! Right?

Andrew Chen writes about his view on social networking and going from zero to critical mass in which he says that there are quite a few variable involved in getting to the top, the most important being, users. So another question I would offer up is, What do new developers and entrepreneurs feel about joining such a crowded space where critical mass is imperative, cash is usually dependant on advertisers and their users are already inundated with other social nets that they are a part of????

I’m going to botrrow one more time from Andrew Chen in which he writes the following:

Does everyone remember Metcalfe’s Law? It was formulated by Bob Metcalfe, the inventor of Ethernet and co-founder of 3Com, who stated: The value of a network is proportional to the square of the number of users of the system (n²).

I’m cool with that. My only problem is, I want to spread myself thin. Yes sometimes I exhale as I run through logins and pw’s, and I’m always on the lookout for something new and cool but… I’m actually not sure what I’m looking for, I’m constantly looking for IT, but it has not been developed yet. Most Social Net’s are for the most part a lot alike. And maybe thats why we are members of more than one, because the one is not the ONE.  Maybe we’ll know when we get there, but for now it seems like most of us are willing to maintain out memberships in multiple social nets, even if it means working a bit to keep them updated and current.